Looking down the main street, church in the foreground.

Pickles Pig visiting the interior of an open house.

One of the stores: people just left, often leaving most everything behind. 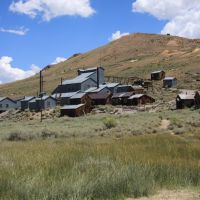 A view of the mine from down the hill. 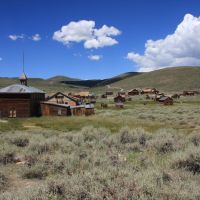 Looking down from the mine toward the school house. 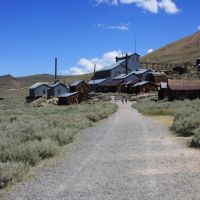 Main entrance to the mine. 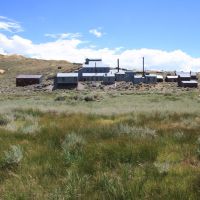 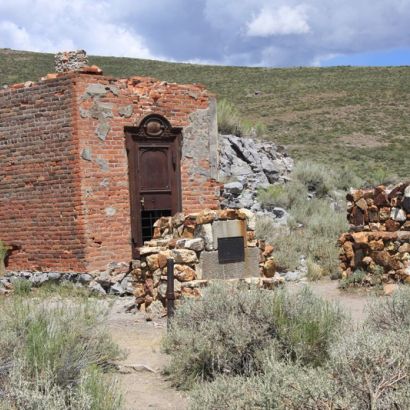 The vault is all that remains of one bank. 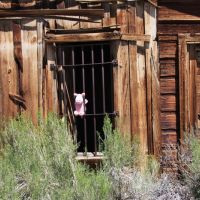 Pickles Pig at the wooden jailhouse. 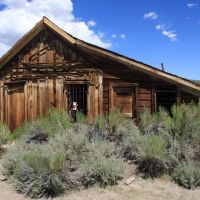 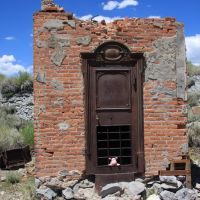 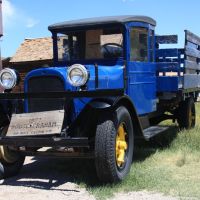 A vehicle that was abandoned,but like the rest of the town, is maintained in its found condition.

Bodie State Historic Park is a genuine California gold-mining ghost town. Visitors can walk down the deserted streets of a town that once had a population of nearly 10,000 people. The town is named for Waterman S. Body (William Bodey), who had discovered small amounts of gold in hills north of Mono Lake. In 1875, a mine cave-in revealed pay dirt, which led to purchase of the mine by the Standard Company in 1877. People flocked to Bodie and transformed it from a town of a few dozen to a boomtown.

Only a small part of the town survives, preserved in a state of "arrested decay." Interiors remain as they were left and stocked with goods. Designated as a National Historic Site and a State Historic Park in 1962, the remains of Bodie are being preserved in a state of "arrested decay". Today this once thriving mining camp is visited by tourists, howling winds and an occasional ghost.